KJ is featured on the May cover of Men’s Health Australia. Check out the photos in the gallery and read his interview! I will add scans when the issue releases. 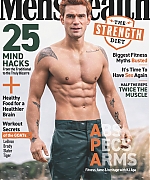 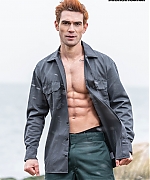 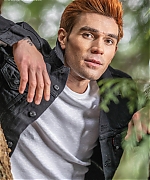 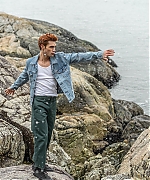 MEN’S HEALTH AU – Kiwi actor KJ Apa came out of nowhere to land the coveted role of Archie Andrews on hit teen drama Riverdale. As his star continues to rise, though, Apa’s managing something very few of us could hope to achieve: to go from nobody to next-big-thing without losing yourself.

In a different life, KJ Apa might have been an All Black. It’s every young Kiwi boy’s dream, right? But while it was mostly schoolboy, pie-in-the-sky musing, Apa was perhaps a little more equipped than most to imagine himself in a vein-bulging lather, bellowing out the haka before a Test at Eden Park.

He had pedigree – his uncle was an All Black. And thanks to his dad, a fitness nut, he’d been taught the discipline and dedication he would require if he was to make it in elite sport. Most importantly, Apa had the confidence to believe he could do anything. Which is a good thing, because that’s exactly what he proceeded to do.

“That was the first goal, to play rugby,” says Apa, who instead of rampaging toward the try line in a Bledisloe Cup decider, is talking to MH on a snowy afternoon in Vancouver’s Lighthouse Park. “I wanted to follow in my uncle’s footsteps.”

Apa is sitting on a stool nursing a coffee in front of an old blue house, looking down through the tumbling snow to where the sea would be if he could see it. It’s a rare day off from shooting on his hit show Riverdale, a soapy, subversive update of the classic Archie Comics series, in which he plays the titular character Archie Andrews.

Archie is one of the reasons Apa isn’t chasing his boyhood dreams, though the levers of fate creaked particularly hard on this one. Apa blew his first audition for the sought-after role. He was tired and jet lagged after flying in from NZ. Fortunately, the show’s creator, Roberto Aguirre-Sacasa, decided to give him another shot. This time he brought out his guitar and nailed it. But he’s often wondered what would have happened if he didn’t get the gig.

“I like to think I would have booked something else but maybe I would have been back on the next plane to New Zealand after a couple of weeks and back to playing rugby, trying to make that happen for myself,” says Apa, whose abbreviated nickname KJ – short for Keneti James – has the ring of stardom, whatever the field. “It was pretty much next on my list.”

Instead of 130kg props, Apa would face an equally imposing psychological foe in overnight fame and its stacked front row: money, girls, media. It can easily swallow a kid up. Heck, it almost did. Apa admits he got caught up in it all for a while there. Got caught up in himself.

“When this show first took off, being so young and getting success like that isn’t a natural thing for a human to deal with,” says Apa. “That amount of fame in such a short time. It’s easy to get distracted and get carried away. I experienced that and I’ve learned from those experiences.”

To be calling yourself out at 23 gives you an indication of Apa’s maturity. That could be due to where he came from: the suburbs of Auckland, descended from Samoa, where his dad was a ‘matei’ or village chief. They’re places most Hollywood casting agents regard as nowhere. “Nobody even knows what Samoa is over here,” he says.

Read the rest of the interview at the source 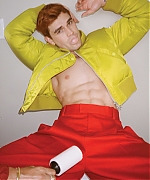 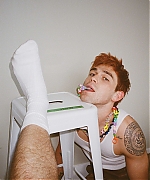 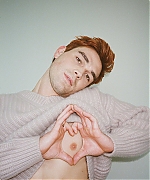 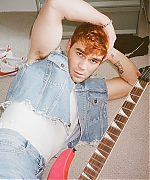 INTERVIEW MAGAZINE – If you caught last year’s lockdown thriller Songbird, you might have noticed something different about its star, K.J. Apa. Since 2017, when he was a mostly unknown actor from Auckland, New Zealand, he has risen to become one of the most identifiable faces—and heads—in Hollywood. As Archie Andrews on the CW’s noir-ish teen soap Riverdale, Apa has, over the course of the show’s last four seasons, been dying his hair a bright copper red to match the beloved comic book character on which his performance is based. It’s become so entwined with the way people perceive him off-camera that when he made Songbird at the outset of the pandemic (it was the first movie to shoot in Los Angeles under COVID-19 guidelines), his shaggy brown locks and week-old stubble were a reminder, to him and us, that Apa is more than the role he plays on one of television’s most popular shows. As he tells his Songbird costar Demi Moore, it reminded him that he’s a person, too.

DEMI MOORE: I’ll go easy on you. Tell me where you are.

APA: I’m in Vancouver. I just touched down yesterday for my quarantine before we shoot the second half of season five of Riverdale. It’s a little daunting, but I’m grateful to be working during this crazy time.

MOORE: It’s interesting, because the two of us have been on the maiden voyage. Part of why I wanted to do Songbird was because we were the guinea pigs, getting out there and seeing if we could make this work, and if other people could work as a result of it.

APA: I don’t know how it was for you, but I remember thinking the movie was either going to be really good or really bad, because of the condition of the world and how we were forced to shoot during COVID. You and all these amazing people were attached, and I was like, “Fuck it. Let’s try.”

MOORE: I had no idea what I was getting into. It wasn’t a huge role, but it wasn’t really about that. It was about the adventure.

APA: I felt so free coming from a show where I feel like I’m in jail a lot of the time. There are so many restrictions on what I can and can’t do. With this character, it was like, “Wow, this is what it’s like to really express myself in a natural way.” I wasn’t covered in makeup or hair products. I had long hair and a beard. I just felt free.

MOORE: I can see how playing a character that’s based on a comic book would come with a specific framework.

APA: There’s been so much pressure in playing Archie. I’m so grateful for the show and its success, but at the same time, there’s a lot of baggage that comes with that success. I feel like the only people I can talk to about my issues are my costars, the people who can really relate to me. Cole [Sprouse, who plays Jughead Jones] is an amazing person to have on set, because he’s been doing this his whole life. I try and look at it from a fan’s perspective to understand the way they think. But there are times when I’m like, “Wow, they really have no idea that we are actual people. They can’t separate us from our characters.” You don’t have that in other professions. You don’t dissect the life of a builder and start judging the decisions he makes in his life with his wife and kids. As an actor, I will be judged on everything: my political opinions, my opinions on drugs, my opinions on the people I want to be with. Everything. It’s something I’ve had to come to terms with.

MOORE: We’re living in a time of social media that has amplified everything you just described to an overwhelming degree. You’re responsible for a character that people have an investment in, and being able to separate who you are from who that character is, knowing they can exist separately and simultaneously, is not easy.

APA: Having Luke [Perry] on the show was such a blessing for me. When I was first experiencing success, Luke had a way of just quashing it and being like, “You’re only as important as the PA sitting over there.” He knew everyone’s name. Sometimes people talk about our job as this really important thing, like no one else can do it. Luke had the ability to be like, “Step on your mark. Stay in line. Go home. Show up on time. Treat people with respect.” I loved that about him.
END_OF_DOCUMENT_TOKEN_TO_BE_REPLACED

END_OF_DOCUMENT_TOKEN_TO_BE_REPLACED 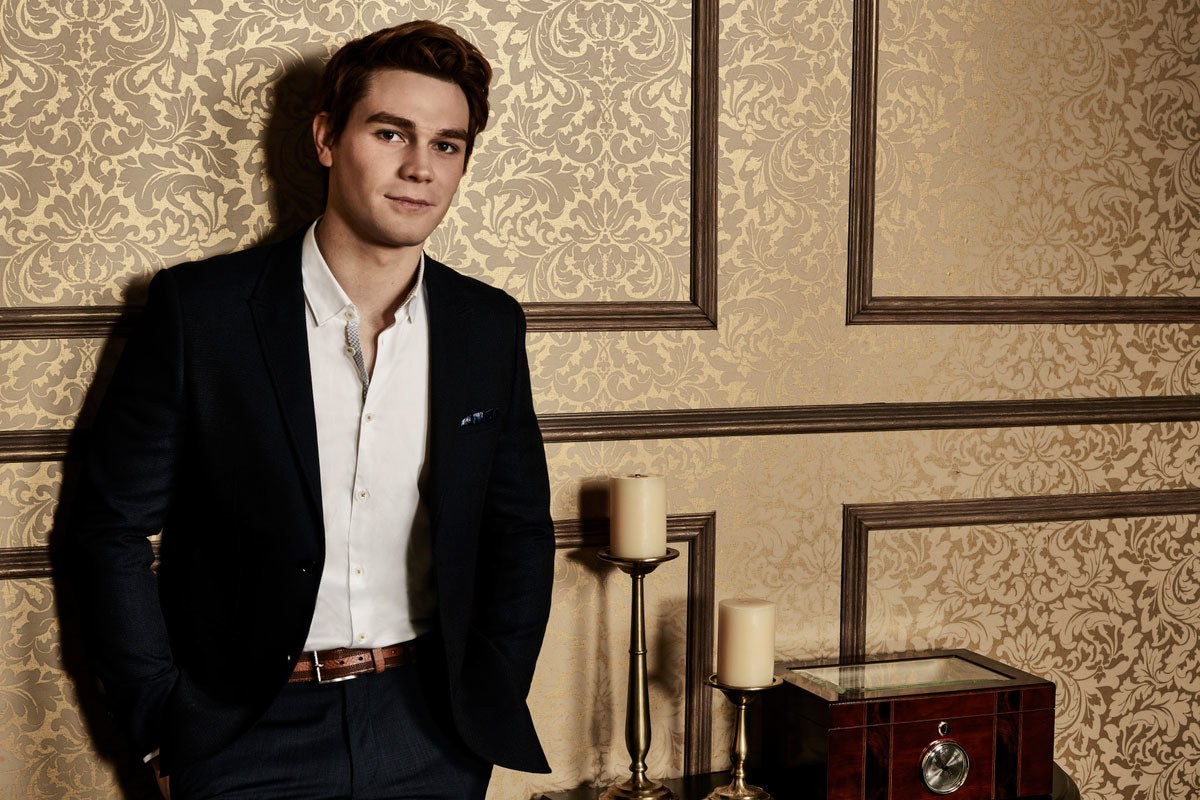 TEEN VOGUE – Every week on Riverdale, we hope to get one step closer to finding out who murdered Jason Blossom. But before we get to the bottom of the small town’s biggest mystery, it seems we’re always thrown another twist or surprise. Plenty has happened so far during the suspenseful first season: we’ve watched Archie and his teacher Ms. Grundy fall into a very illegal relationship — only for her to eventually depart; witnessed Veronica fall into some family drama with her mother; and felt our hearts break for Jughead as he navigates school, friends, and a pretty terrible home life. There’s been plenty more happening in the supposedly quiet town of Riverdale, and we just simply can’t stop get enough of the CW show.

What’s also been great to see is just how much the cast totally loves hanging out with one another. KJ Apa and Cole Sprouse who play Archie and Jughead respectively are total bromance goals. There’s even speculation that Jughead and Betty are dating IRL. And they all have some pretty strong feelings about who actually killed Jason Blossom.

It’s always a little unclear exactly what will happen next on Riverdale, and we’re excited to see how the mystery gets wrapped up (and the possibility of zombies in the show’s second season). In the meantime, it looks like the show’s cast paid homage to another CW classic: Gossip Girl. Teen Vogue received some glamorous photos of the actors, giving their best Manhattanite eleganza. They’ve gone from Riverdale and straight to the Upper East Side. And most importantly, this most definitely makes Jughead the show’s Gossip Girl considering all his snooping and voiceovers, right?

Hi everyone! On Saturday, KJ Apa and Riverdale co-star, Cole Sprouse attended the SXSW festival in Austin, Texas. I’ve added some photos from social networks taken throughout the festival along with 2 events KJ attended, the Nerdish Bash and BuzzFeed and The CW’s Riverdale Presents Pep & Rally to the gallery. I’ve also added one polaroid KJ taken by Buzzfeed during the festival to the gallery. Enjoy! It looked like KJ and Cole had a lot of fun! 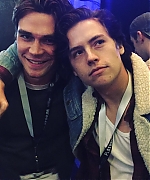 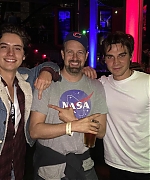 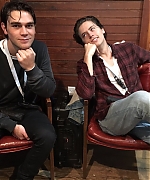 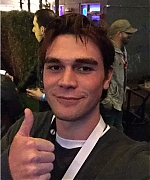 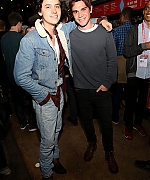 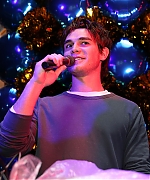 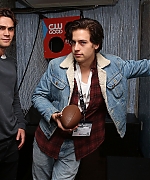 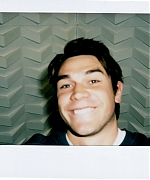