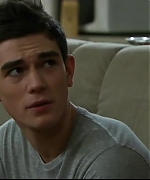 Brooke finally has a kidney transplant, a kidney becomes available after Dayna’s mother is involved in a car accident. Dayna’s mother initially arrived in hospital in a stable condition but Bree and Josh chose to drug her so that she was brain dead and her kidney could be used. Initially Dayna had refused to go ahead with allowing her mothers kidney to be used but agreed at the last minute. Kane arrives to visit his mother before her life support was turned off. Wendy’s unsettled to realise Dayna and Kane have nowhere to go. Evan surprises everyone by asking the orphans to stay.